The Class of '56
By Joseph Ferriss

When a group of students graduate from high school or college, the year of their graduation is commemorated and is given a name to remember by its year of the event such as "the class of '56". Each would go their own way afterward and some would develop fame and or fortune and have an impact either locally or broader. Such classes would have reunions a decade or so later to gather and see what became of everyone from that class. Reflecting on this got me to wondering, what about foaling crops of horses? I became curious about this decided to look into the "Class of 1956" in Egypt, what horses were born that year and what became of them? 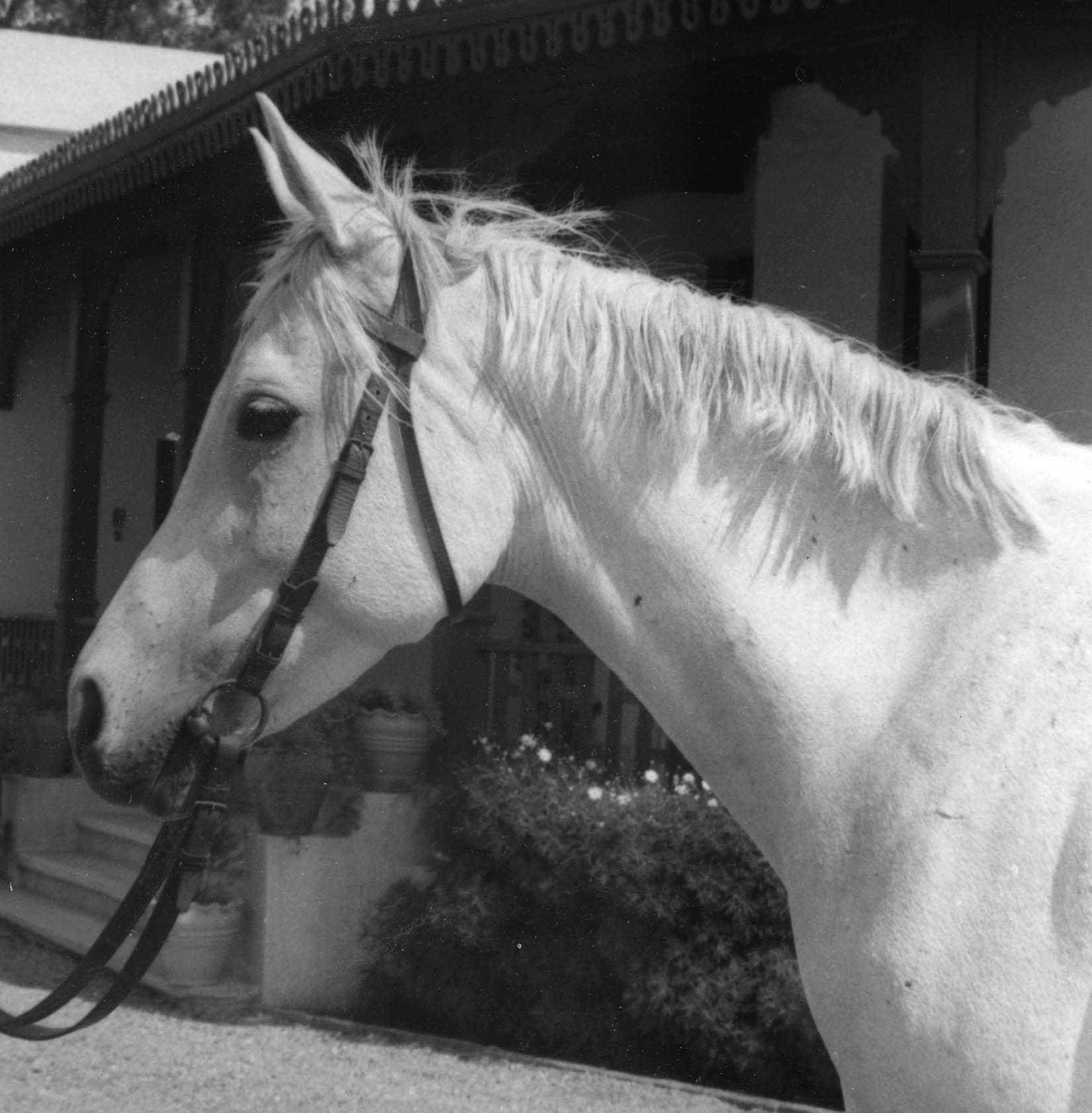 Bint Kamla (El Sareei x Kamla)
first born foal from the "class of 1956" at the E.A.O.,
she created a dynasty in from her daughters Lotfeia and Nazeema.
Judith Forbis photo.

1956 was a point in time of great development in the world as well as great new challenges. It had been about a decade since World War II ended. Countries were rebuilding and some governments were changing and new ideas were developing regarding how to govern its people. In America, it was a period of great economic and industrial growth. American cars were getting bigger and beginning to sprout the unusual "fins" while European cars came in two types, the practical rugged small cars and the dramatic hand built ones such as Rolls Royces and Ferraris, but none sported "fins."

Bint Futna (Hamdan x Futna) a lovely mare,
one of three foals from the class of 1956 from the private breeder,
Ahmed Hamza of Hamdan stud.
Judith Forbis photo.

The middle East was a time of reformation and sometimes conflict. Egypt was now governed by a new system led by Gamel Abdel Nasser, based on invigorated Egyptian nationalism and the desire for independence from foreign countries. 1956 was only a few short years after the end of Egypt's long monarchy which meant that the Royal Inshass Stud of Arabian horses was dispersed and some would become a part of the government breeding program, formally called the Royal Agricultural Society (R.A.S.), now renamed the Egyptian Agricultural Organization (E.A.O.). It was a challenging year for Egypt but nonetheless, the E.A.O. managed to produce 32 Arabian foals in 1956 at their various stud farms. Private breeders in Egypt only managed a few foals. Hamdan stud produced three mares Okt El Fol (Hamdan x Bint Barakat), Bint Folla (Hamdan x Folla) and Bint Futna (Hamdan x Futna) from his prized Tahawi bred mares. All three would go on to establish families internationally. Al Badeia stud only produced one foal, Bint Shams (El Sareei x Shams) in 1956. 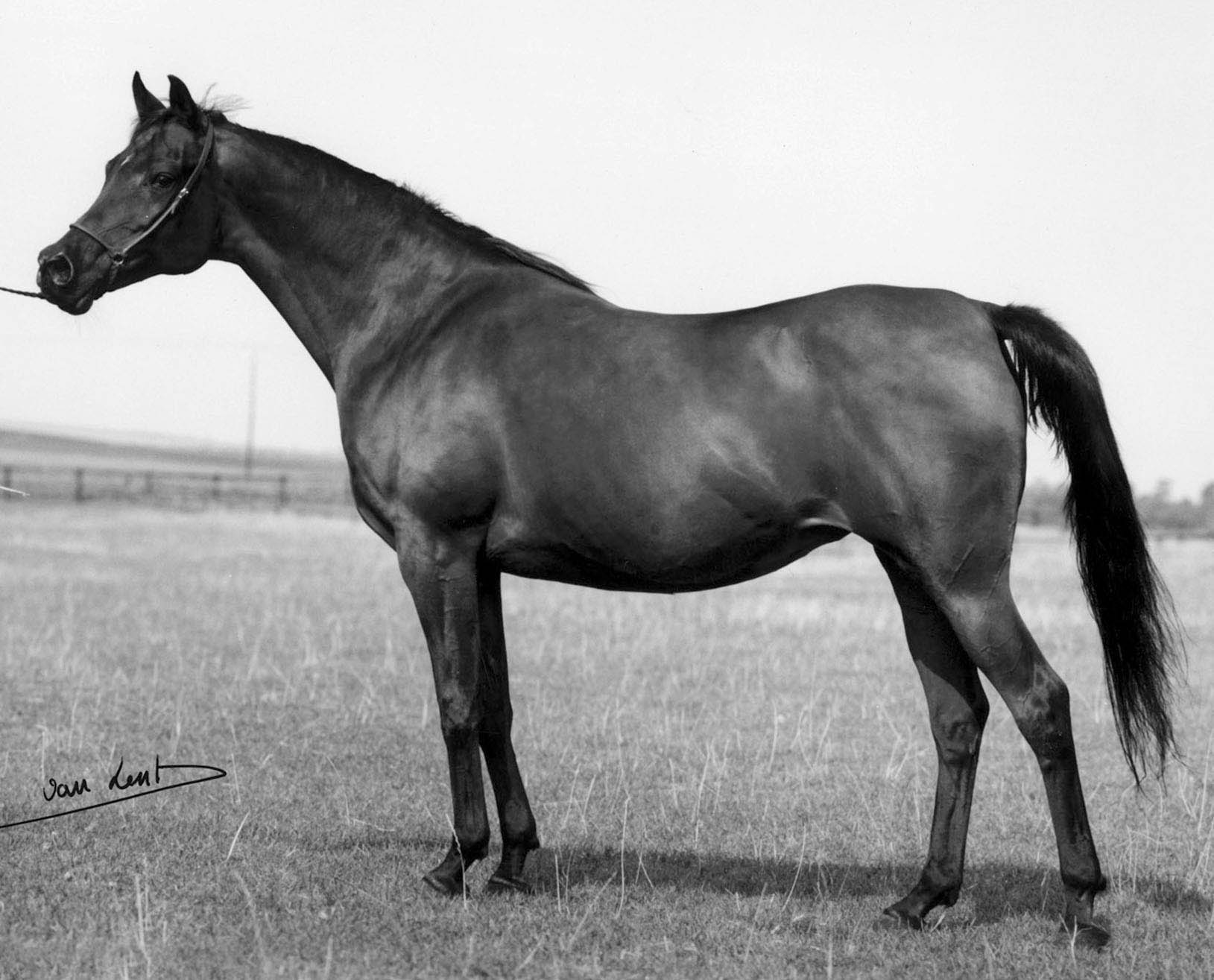 Among Badr's six foals in the class of 1956
was the Inshass bred mare Mona whose daughter Hanan
pictured here would become a world famous family.
Rik VanLent photo.

Putting things in perspective in 1956, legendary Ansata Ibn Halima and Aswan had not yet been born and Moniet El Nefous was only ten years old but had already produced five foals, including 3 of her famous daughters. Nazeer's first two get to leave Egypt were the stallions Hadban Enzahi and Ghazal who went to Germany the year before and were at the time too young to create a sensation. No Nazeer bred horses had yet reached American shores in 1956. 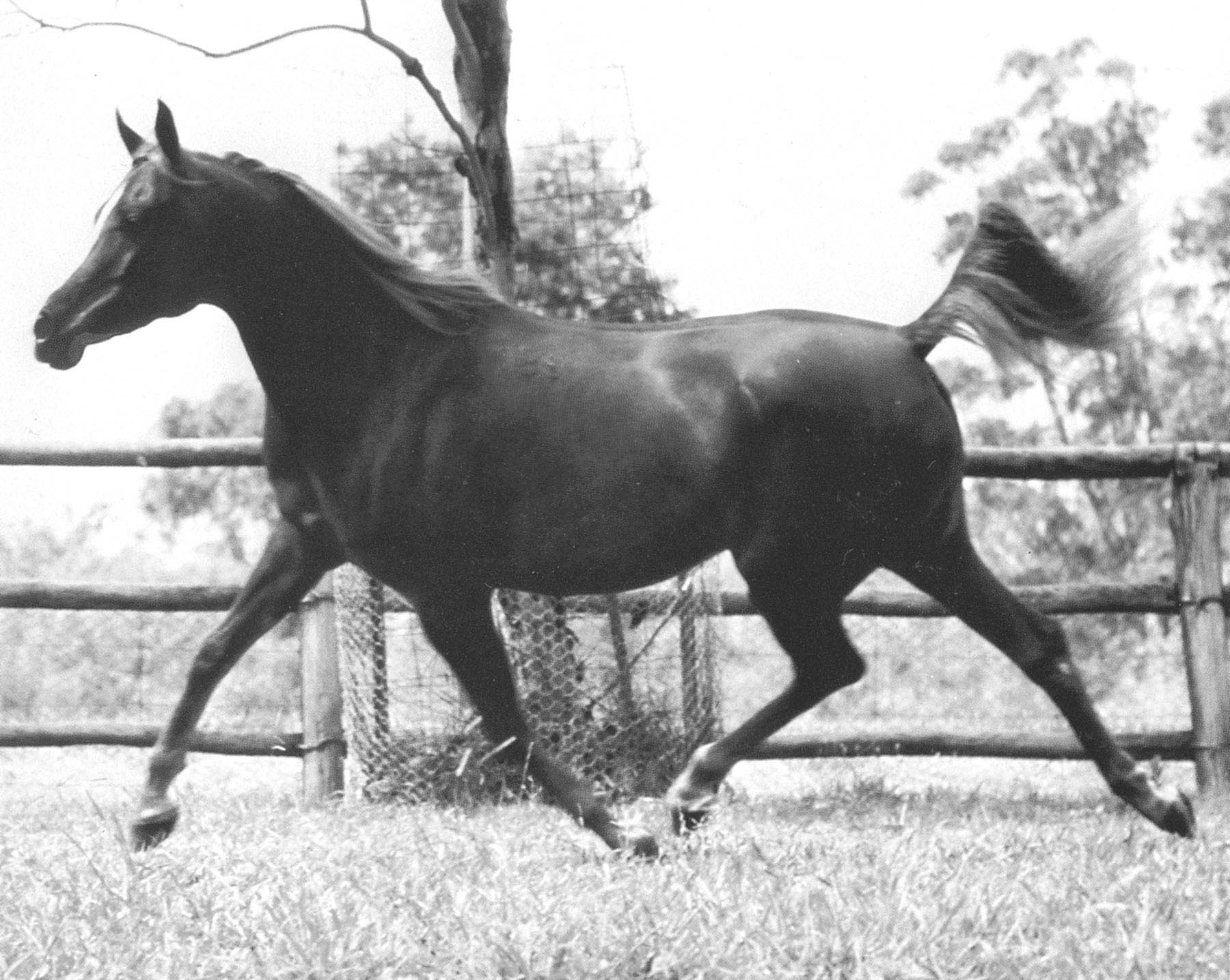 How did the breeding program at the E.A.O. look in 1956? Five E.A.O./R.A.S. stallions were used that year. The famed Nazeer was one of them but had not yet become world famous. The others used included El Sareei, Balance, Sid Abouhom, and El Nasser. How were they used? Nazeer and El Sareei each sired 9 foals, and Balance, Sid Abouhom and El Nasser sired one each. So who sired the remaining foals? Four stallions obtained from the dispersal of the Inshass stud were used by the E.A.O. Among them were the not yet famous Anter, sire of one foal, and Sameh, sire of two. Quite remarkably the third most heavily used stallion at the E.A.O. in 1956 was the Inshass bred stallion Badr who was a son of two desert bred horses given to the King of Egypt by Midhat Bisharat Bey. Badr sired six horses. From the class of 1956, his most famous daughter would be Mona out of the Inshass bred mare Mahdia. Mona would produce the stallion Maher for the E.A.O. and the beautiful Morafic son Bilal for Shams El Asil stud in Egypt. She also produced two magnificent daughters, Serenity Montaha, the full sister to Maher, and the exquisite Hanan by Alaa El Din whose name would become among the most celebrated of all Egyptian mares. If Hanan was any indication, the class of 1956 was shaping up to be an historic one. 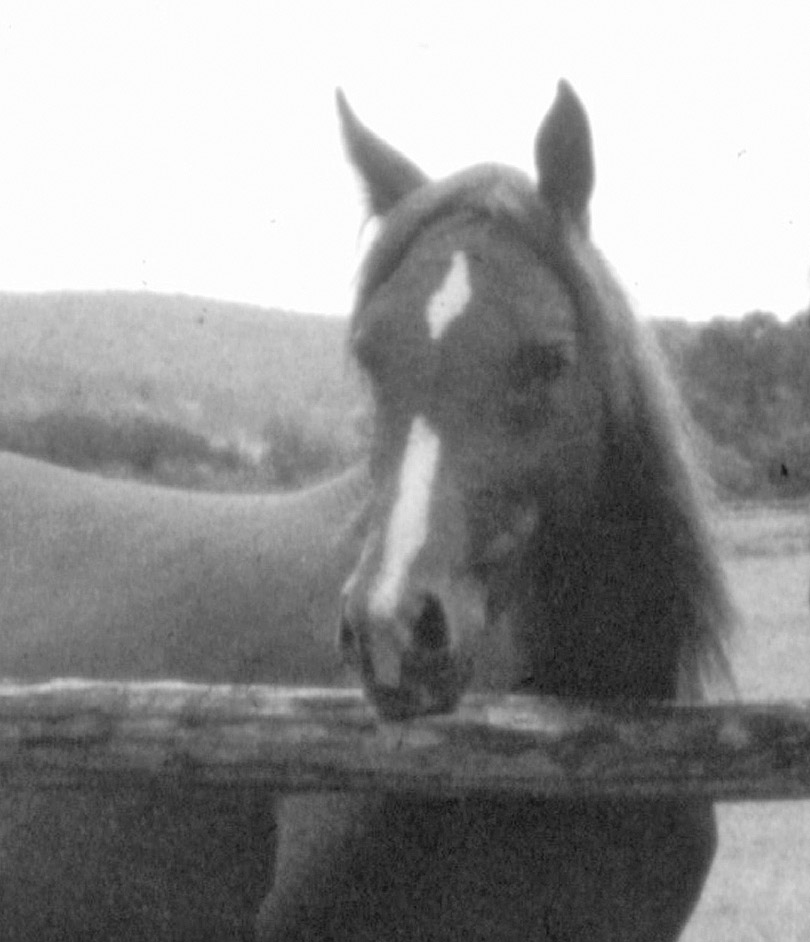 The lovely Bint Dahma, known as Kismat in Egypt,
from the class of 1956. She was imported to the U.S. in 1958
by Richard Pritzlaff and became an important mare line.
Ferriss archive.

What mares produced at the E.A.O. in 1956? Of the producing mares, 21 were of E.A.O./R.A.S. breeding and 11 were from Inshass bloodlines. From the 21 producing E.A.O. mares in 1956, the lovely Sheikh El Arab daughter Kamla would produce Bint Kamla (x El Sareei) who not only produced the E.A.O. stallion Shaarawi but also the prominent mares Nazeema (x Alaa El Din) dam of the magnificent Ibn Nazeema, and Lutfia (x Alaa El Din) founding mare for both the Babolna stud in Hungary and NK Katharinenhof in Germany. Other El Sareei daughters in the class of 1956 would eventually become famous for their influence. One of them was Bint Kamla's three-quarter sister, Rida (El Sareei x Rouda) even though she had only one foal. Rida's only foal was the filly Hosna (x Ibn Maisa) who went to Babolna where she had many foals among which included the supreme 27-Ibn Galal-5, the splendid chestnut mare who became Australian National Champion. This is the dam line of such renowned international champions as Simeon Shai, Simeon Sadik and Simeon Sehavi to name a few. Another El Sareei daughter from the class of 1956 was a fine little chestnut named Kismat in Egypt but was among the first E.A.O. horses to come to America via Richard Pritzlaff where she was named Bint Dahma, a daughter of Dahma II, the first born Nazeer daughter. Bint Dahma founded a strong family in America. Her granddaughter Sariella produced SAR Ibn Moniet, an important sire. Bint Dahma also has descendants throughout Europe, the Middle East, Israel and South America. In 1956 the El Sareei daughter Rashida (x Yashmak) was born and she would establish an international family through her daughter Nazic (x Morafic). El Sareei created fame one more time in 1956 by siring the lovely black mare Mohga, a daughter of legendary Yosreia who would later create the incomparable stallion Aswan. Mohga is dam of one of the most beloved mares in America, Nahlah (x Morafic) many times a popular show winner. But Mohga's sons also claimed fame including the extraordinary European sire Ibn Galal. His full brother El Mohktar became a movie star playing an important role in the popular movie The Black Stallion. 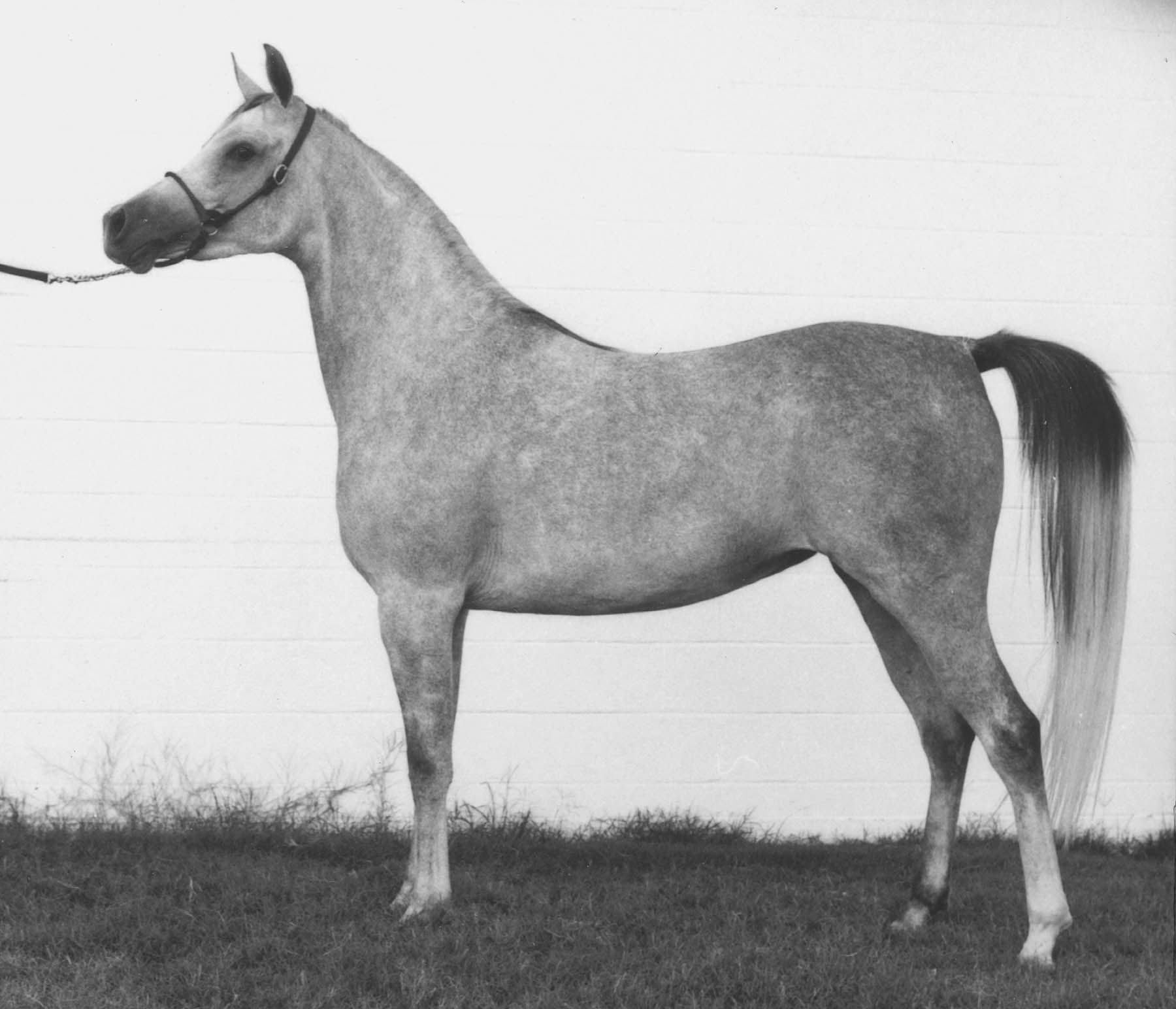 Nahlah, an absolutely beautiful and charming mare
the product of two members of the class of 1956, Morafic and Mohga.
She was twice U.S. National Top Ten mare and dam of National winners.
Judith Forbis photo.

What about the stallions from the class of 1956? One of the old R.A.S. stallions still in use was the great racehorse Balance who got one son in 1956. That was the stallion Nasralla from the mare Sehr. In the tradition of great racing Nasralla raced well and sired important race horses and eventually sired 48 get for the E.A.O. Yet his eventual claim to fame would become via his many fine daughters, nearly every one of which has been used for breeding, especially Baheia, in the pedigree of the world's most prolific straight Egyptian sire, Thee Desperado. 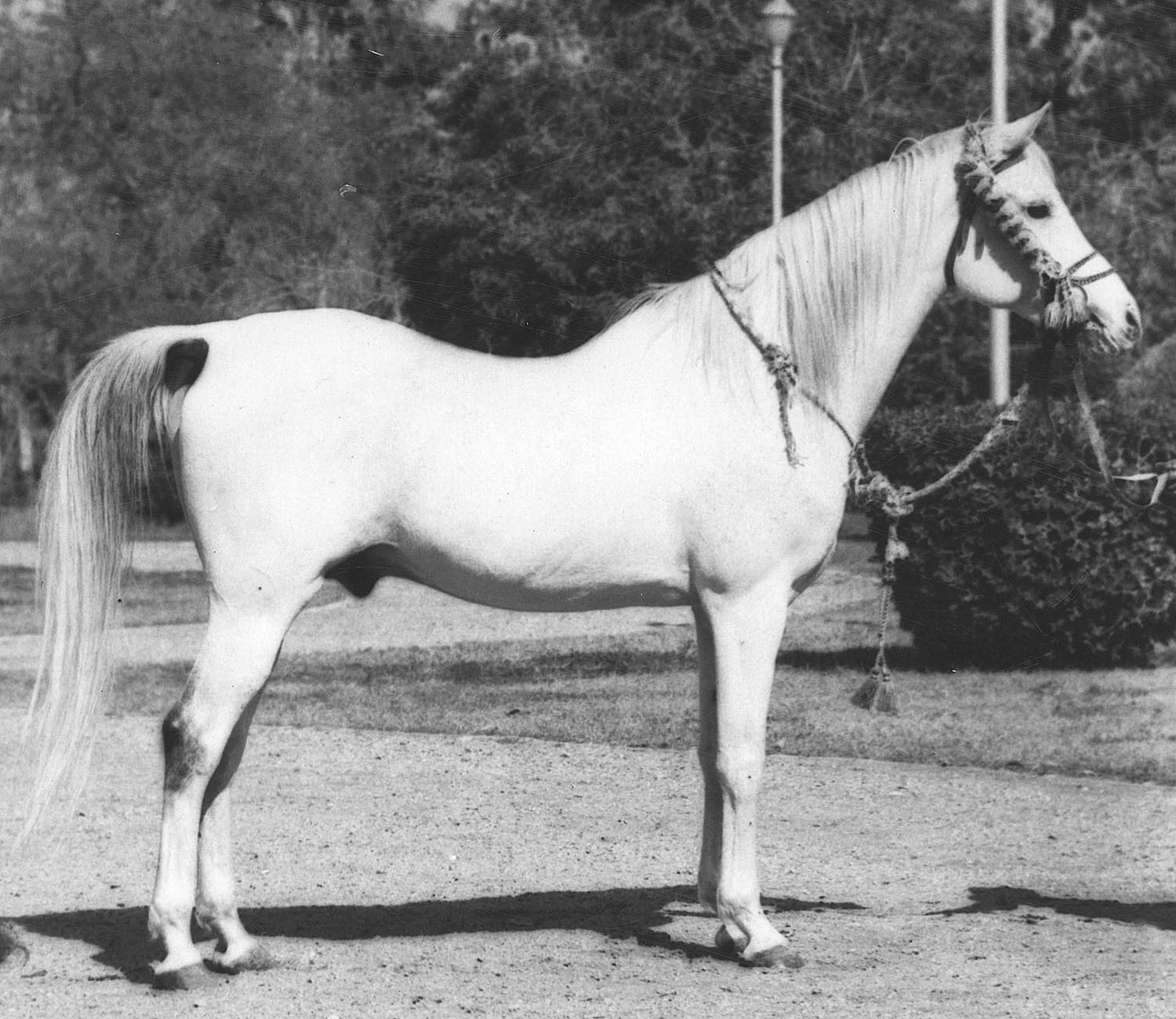 Nasralla, (Balance x Sehr)
one of three important E.A.O. stallions from the class of 1956,
he is found today in many thousands of Arabian pedigrees.
Judith Forbis photo.


Ironically the most famous sire, Nazeer, produced 7 out of 9 foals in 1956 who were not used for breeding! The only two of his get that year that were used for breeding at the E.A.O. would eventually become among the most famous Arabian stallions of all time, Alaa El Din (x Kateefa) and Morafic (x Mabrouka). Indeed by all accounts in photo, film and descriptions by people who saw these two stallions they were spectacular Arabians and indeed they were unforgettable. While the noble Alaa El Din became the patriarch of superior producing mares, Morafic won the title of patriarch of both genders although, arguably Morafic also has created one of the largest sire lines within the Arabian breed. 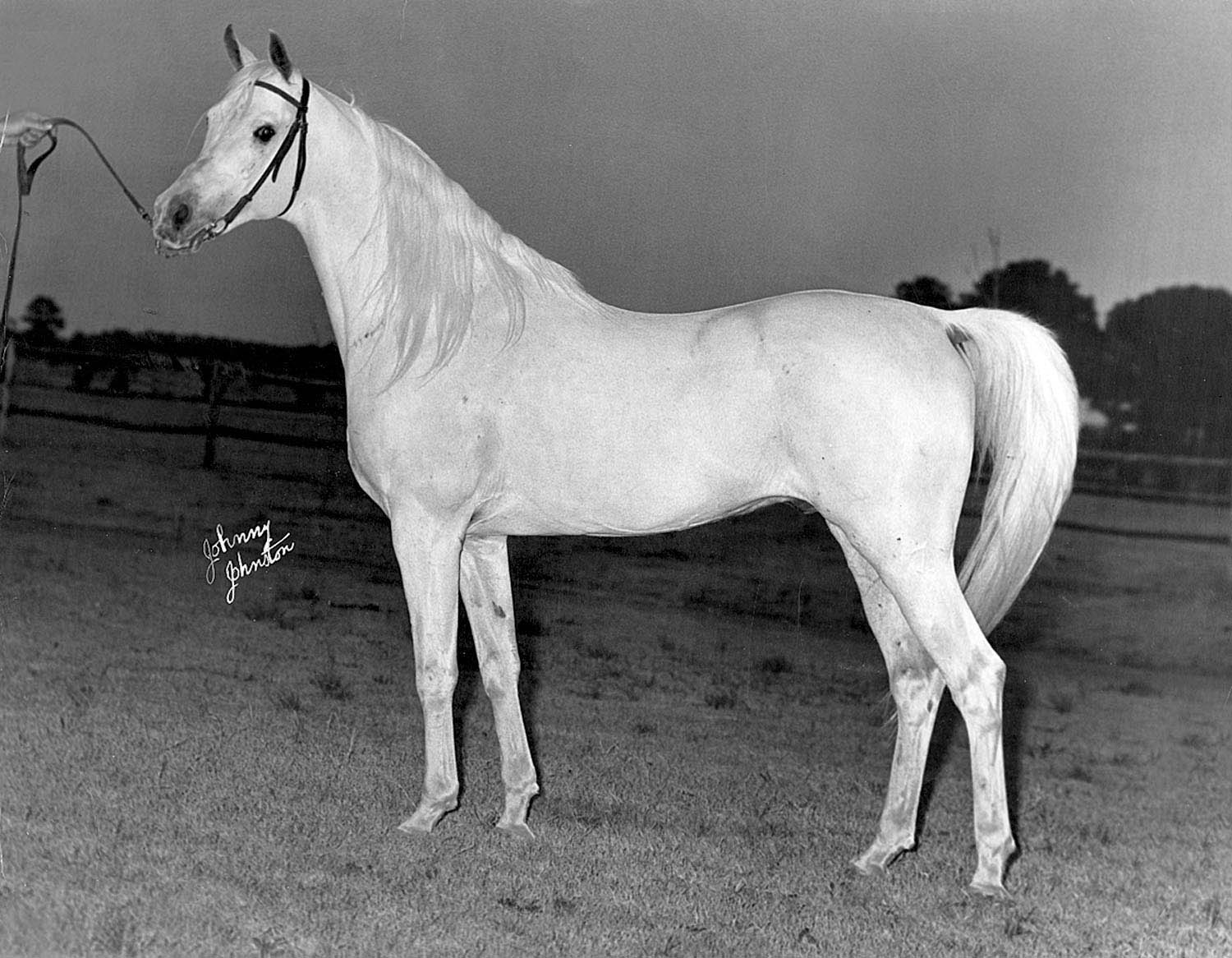 The exotic Morafic (Nazeer x Mabrouka)
one of only two Nazeer get from the class of 1956
to be used for breeding and now a desired
world-wide name in Arabian pedigrees.
Johnny Johnston photo.

Looking back now it is fascinating to see what became of the class of 1956, a year that must have seemed uncertain at the time in Egypt, with conflict on its borders and challenges within. Somehow the spirit of the Arabian horse seems to transcend even the most difficult of times and we are fortunate that the horses and the people who loved them in 1956 have survived to become a part of the legacy of today's Arabian horses. In the near future I will return to this subject to revisit other years to see how they played out into the future. 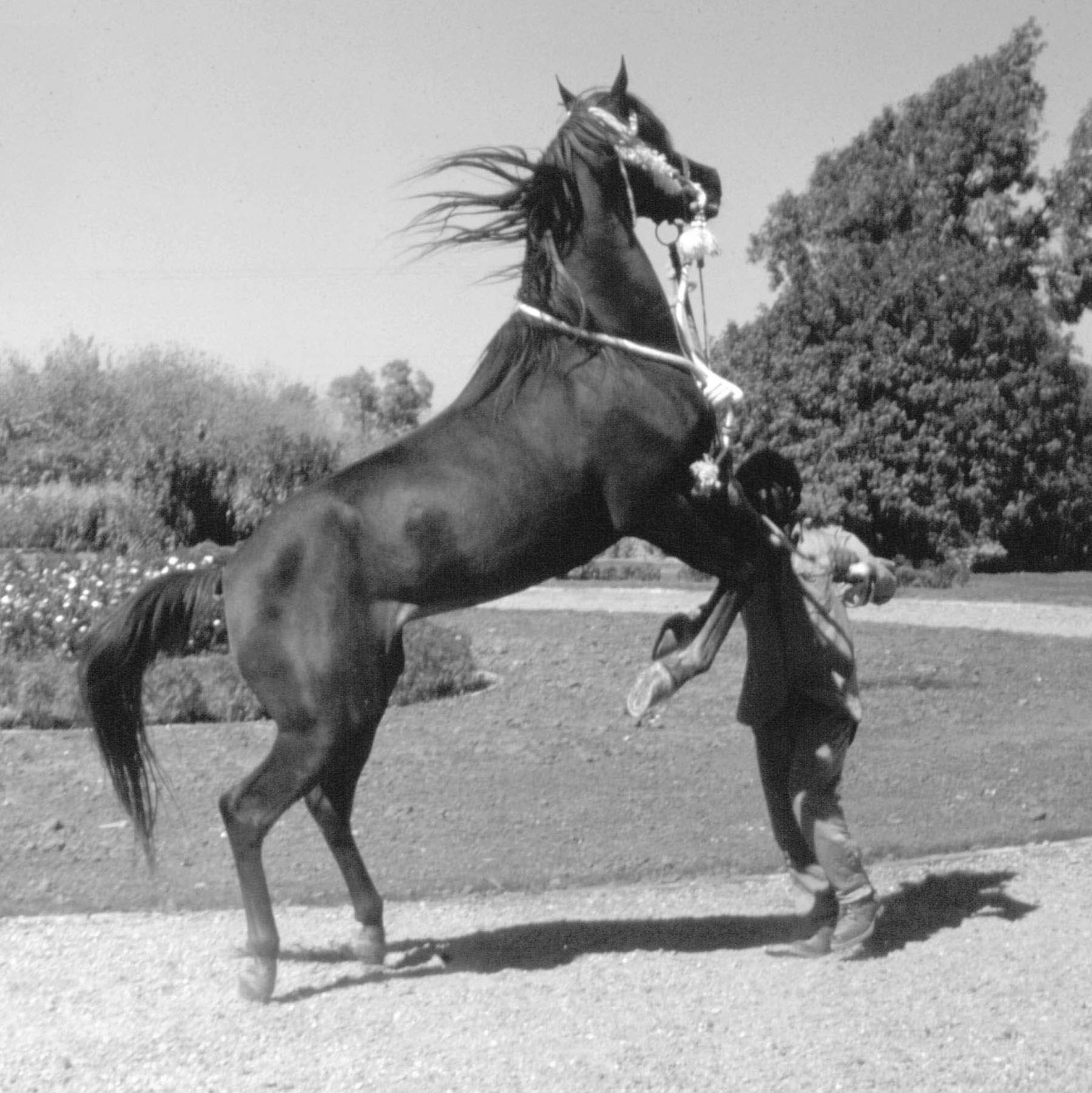 The incomparable Alaa El Din (Nazeer x Kateefa)
the other Nazeer son from the class of 1956,
and the picture of the noble Arabian of antiquity.
Judith Forbis photo. 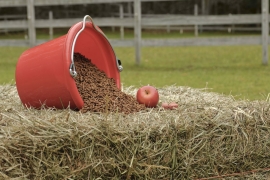 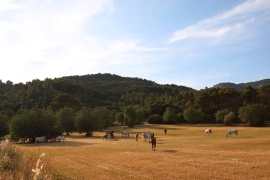 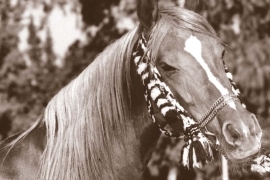 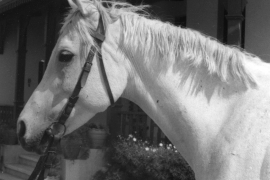 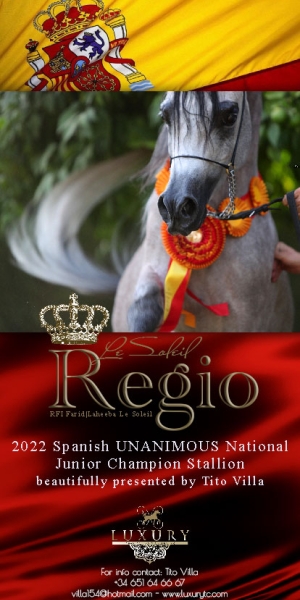